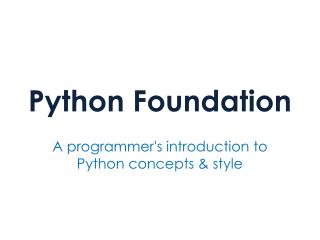 This is a two-day course in Python programming aimed at professional programmers. The course material provided here is intended to be used by teachers of the language, but individual learners might find some of this useful as well.

The course assume the students already know some Python, but that they feel a need to establish a solid understanding of the language to further develop their skills.

The course is released under Creative Commons Attribution 4.0. Its primary location (along with some sample solutions and the original PowerPoint) is at https://github.com/JonJagger/two-day-courses/tree/master/pf. Getting Started with Python - Object-oriented programming in python goldwasser and letscher chapter 2. getting started

Introduction to Database Concepts and Access - . using access 97 - foundation. what is data?. data - facts made up of

Introduction to Computing and Programming in Python: A Multimedia Approach - . chapter 12: making text for the web.