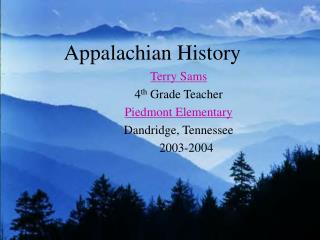 Appalachian History Course Project - . by carmen davis. a journey through the music of appalachia. for my appalachian

Appalachian Music - . aaron davis introducing appalachian studies. what is appalachian music?. no such thing as “

Appalachian Energy Summit - Exhibit b-2. appalachian energy summit. 2014 successes report presentation to the board of