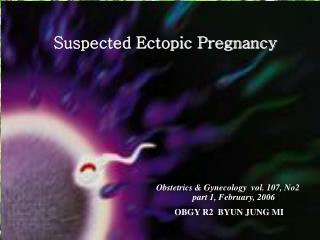 ECTOPIC PREGNANCY - . definition it is when a fertilized ovum gets implanted in an area other than the uterine cavity.

Ectopic Pregnancy - . by rohan kulkarni. defination. any pregnancy where the fertilised ovum gets implanted &amp;

Ectopic pregnancy - Dr. shweta kaul jha is one of the best ivf specialists in indore and provides the very affordable ivf

ectopic pregnancy - Incidence >1 in 100 pregnancies. . recent evidence indicates that the incidence of ectopic

ECTOPIC PREGNANCY - . is implantation of the fertilized ovum in any site other than the normal uterine location.