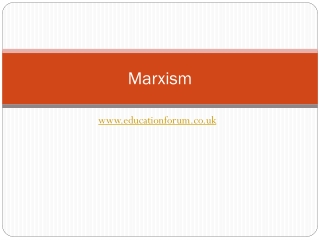 Marxism. www.educationforum.co.uk. Essential Ideas. Society is ruled by those who control the means of production – the economic base

Marxism/ Neo- Marxism - . what is marxism?. the concept of marxism was developed by the german philosopher, economist and

Marxism - . “let the ruling classes tremble at a communist revolution. the proletarians have nothing to lose but their

Marxism - . posc 150 introduction to political theory braunwarth. why study marxism today?. most of the communist world

Marxism - . by oliver milsom. karl marx. karl marx, the son of hirschel and henrietta marx, was born in trier,  germany

MARXISM - Conflict theory. asserts that there are major differences of interests between social groupsdifferences are due

MARXISM - . karl marx was a jewish born german. he was: an atheist, socialist philosopher, economist, journalist, and a