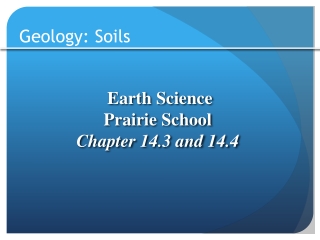 Geology: Soils. Earth Science Prairie School Chapter 14.3 and 14.4. Erosion and Weathering: REVIEW. Erosion: process by which material is dissolved, loosened or worn away from one part of the earth’s surface and deposited in other places.