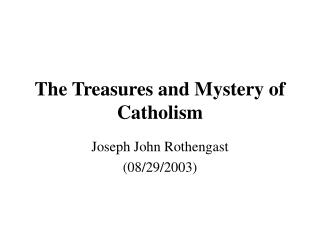 The Treasures and Mystery of Catholism Joseph John Rothengast (08/29/2003) The Nature Of God Etymology of the Word "God" Discusses the root-meaning of the name "God", which is derived from Gothic and Sanskrit roots.

Maori Treasures - . our story. our journey. maori treasures is the culmination of the dreams and lifes work of rangi

Children’s Sermon - Treasures - Our treasures are where our heart

Valentine Mystery - . someone, someone gave me a valen , valentine. a card with hearts and flowers that said “will you

Secrets of the Kingdom of God - . god does not hide things from us, but for us . my goal is that they may know the

MySTERY - . eng 4ci – mrs. blaak. discuss. what do you think of when you hear the word “mystery”? what is the most

The mystery of Shakespeare’s Secret - Elise broach mystery report written by louie nader. the mystery of

Journeying into Easter Mystery - . let us journey into the days of easter mystery. may we become aware o f the divine

The Story of Jesus - . as told in the synoptic gospels. terms. mystery = unknowable mystery of god’s infinite

Mystery - . a mystery book…. is a book with a mystery in it. a mystery is something that baffles understanding and

Ch. 1- a Community of disciples - . objectives. express your concept of the church explain that the church is a mystery

Taking the Mystery Out of Writing a Mystery - . steps to writing a mystery story. step one – story skeleton. fill out