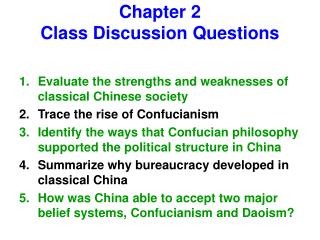 Chapter 16 Discussion Questions - . compare the plan of st. gall (fig. 16-19) to the plan of old saint peters in rome

Class 2 – chapter 2 - . financial fundamentals of accounting (cont.). assets are financial uses. the left-hand side of

Wednesday September 24 th Class Discussion Questions - . activity 75: what do you observe about the length of daylight

Class discussion - Quaestio : are the travels of ibn battuta worth studying? nunc agenda : take out your reading from

Class discussion - . healthy and productive. objective:. students will be able to identify the 6 rules for class

Chapter 2 Questions - Q1. what are the three basic ways financial capital is channeled from “net savers” to