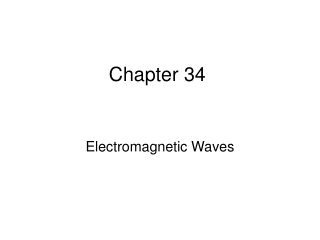 Chapter 34. Electromagnetic Waves. Poynting Vector. Electromagnetic waves carry energy As they propagate through space, they can transfer that energy to objects in their path The rate of flow of energy in an em wave is described by a vector, S , called the Poynting vector.

CHAPTER 34 - Click your mouse anywhere on the screen to advance the text in each slide. after the starburst appears,

Chapter 34 - . vertebrates. overview: half a billion years of backbones. early in the cambrian period, about 530 million

Chapter 34 - . behavior. stimulus - any kind of signal, or change in the environment response - specific reaction to a

CHAPTER 34 - . fdr and the shadow of war. essential question: number one. how did the reciprocal trade agreements act of

Chapter 34 - . vertebrates. half a billion years of backbones. by the end of the cambrian period, some 540 million years

Chapter 34 - . vertebrates. figure 34.1 the vertebrae and skull of a snake, a terrestrial vertebrate. chordates.