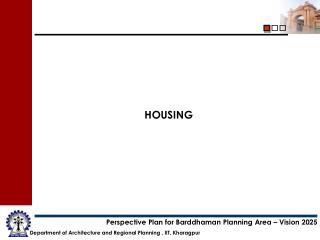 Housing - . general priniciples of planning. the following points should be considered before planning and designing

hOusing - . by ishdeep , mattia , selina. tipis are decorated by their old or small clothes and to make them look pretty.

Housing - . ‘’how have houses changed in richmond from the 20 th century onwards?’’ jaycie zhao. there are 3

Housing - . pompeii and herculaneum. house of argus. house of the golden

HOUSING - . east , west home is best. home is the place where you live together with other family members . the place

Housing - . lesson starter:. today we will…. examine the inequalities in housing in the usa. identify the

Housing - . think and talk about: in the uk in the czech republic my house / flat. general information : types of the