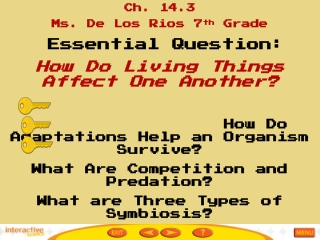 Ch. 14.3 Ms. De Los Rios 7 th Grade Essential Question: How Do Living Things Affect One Another? How Do Adaptations Help an Organism Survive? What Are Competition and Predation? What are Three Types of Symbiosis? Interactions Among Living Things Pgs. 490-499.