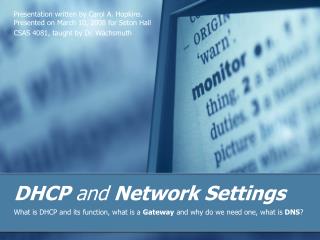 Presentation written by Carol A. Hopkins. Presented on March 10, 2008 for Seton Hall CSAS 4081, taught by Dr. Wachsmuth DHCP and Network Settings What is DHCP and its function, what is a Gateway and why do we need one, what is DNS ? What is DHCP? Decentralized Hospital Computer Program

DHCP - . dhcp. dynamic host configuration protocol does not require an administrator to add an entry for a computer into

DHCP and NAT - . by - ricardo sanchez, ken wolters and william hibbard . what is dhcp ?. dhcp stands for