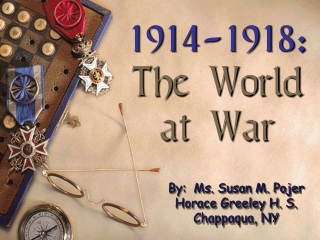 1914-1918: The World at War. By: Ms. Susan M. Pojer Horace Greeley H. S. Chappaqua, NY. Who’s To Blame? “The world needed a great statesman to keep them out of war, but no such statesman existed”. Britain was in a power race with Germany