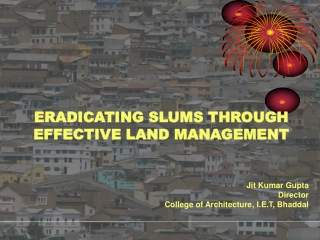 Land Rights and the Slums - . attorney ranier chu and pastor isidoro rabma at the ucpp manila, philippines. justice for

Slums - . james trewby bosco volunteer action. session aims. for participants to have an ‘experience’ of slums,

Eradicating a culture of poverty through Education - . “planting the seed”. definitions. for our purpose, poverty

Eradicating a culture of poverty through Education - . “ planting the seed ”. definitions. for our purpose, poverty

Eradicating Smallpox - . whether traveling on boats or trains, immigrants were often required to undergo vaccination.

Slums Ted - . un defines a slum – a heavily populated run down area of a city characterized by substandard housing and

Eradicating Global Poverty - . how many people die every day simply because they are too poor to stay alive?. 20,000

Land Management for Healthy People : Controlling Human Disease through Ecosystem Management - . a proposal for the suny