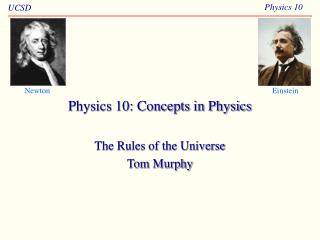 Physics 10: Concepts in Physics. Newton. Einstein. The Rules of the Universe Tom Murphy. Course Objectives. Explore the approach that physics brings to bear on the world around us Reductionism Scientific Method Gravitation and General Relativity as a case study Empiricism & Skepticism

PHYSICS &amp; THE MOTION OF SPORT - . sports are jam packed with physics and motion!. physics concepts such as:

What Is Physics? - . mrs. akibola pearland isd. mathematical concepts. physics experiments involve the measurement of a

Welcome to Physics 100 ! Basic Concepts of Physics - Instructor: neepa maitra. based on the book by paul g. hewitt:.

UNIT 1: Math and Measurement - . physics 2013-2014. physics. what is physics? physics is the study of the physical world