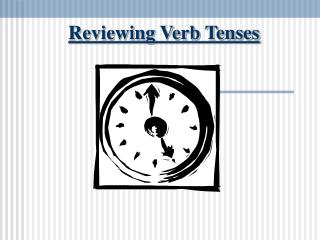 Reviewing Verb Tenses. Verb Tense Review. TENSES AND LISTS. The Simple Present Tense. Expresses a habit or often repeated action. Adverbs of frequency such as, often, seldom, sometimes, never , etc. are used with this tense. She goes to work everyday. They always eat lunch together.

REVIEWING FOR THE U.S. HISTORY EOCT - . from john adams through reconstruction. presidency of john

avoid (verb): to keep away from; to keep from happening - . avoid. avoid construction. avoid looking at someone. avoid

Reviewing for the AHSGE. Developed by F. South and Dennis Martin - . please read the following slides before starting the

A LESSON ON TENSES - . what is a tense?. verb form that shows the time of action is called tense. present tense. 1.