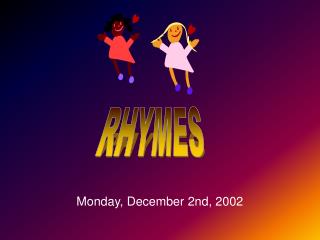 RHYMES. Monday, December 2nd, 2002 . Why to use rhymes?. They are an alternative to the use of graded readers. They have been successfully used in Primary schools. They have a long tradition in English speaking countries.

Nursery Rhymes - Learning with nursery rhymes is essential to the development of every child. the benefits of teaching

Children's Rhymes - By what sends the white kids i ain't sent: i know i can't be president. what don't bug them white

Sounds in Rhymes - . words rhyme when they have the same middle and end sounds. peas. r hymes with . keys. words rhyme

Valentine’s Day Rhymes - . ela-p-r-12 develop awareness of sounds and patterns in language including rhyming. a