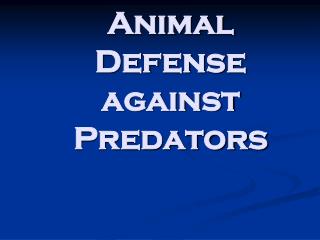 Animal Adaptations against Predators - . how animals have adapted to survive in their environments. name:

What are examples of animal defenses against predators? - . jacqueline arakaki &amp; geoffrey siu. basic means of

Defense against disease! - . immunity. diseases can be caused by a variety of organisms. bacteria or single cell

Defense Against Infectious Diseases - . 6.3. pathogens · an organism or virus that causes a disease ·viruses, bacteria,

Defense Against Infectious Disease - . how does my body fight disease?.