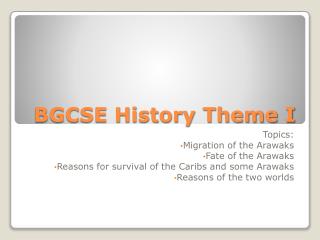 Theme I - . european higher education in a globalised world. three sub-groups. universities as a public responsibility

AICE INTERNATIONAL HISTORY: THEME 3 - . the crisis of communism and the end of the cold war. sino-soviet conflict . 1950s

I. The Theme Of Revelation - . (rev 1:7) behold, he cometh with clouds; and every eye shall see him, and they also which

Envelope Theme Activity Part I - . find five different quotes in the novel to support your theme from chapters 1-3. write

Brief History of Amusement and Theme Parks - . they began with festivals in europe to sell/barter/trade goods and to

World History I - . unit eight block four lecture major islamic events and comparative religion. make sure that you are

World History I - . unit five block three lecture the influence of greek geography (generally and on

American History I - . potential writing prompts that could be used in testing. unit 1. impact of european exploration on

World History I - . unit six block five lecture the end of the republic and dawn of the empire. make sure that you are