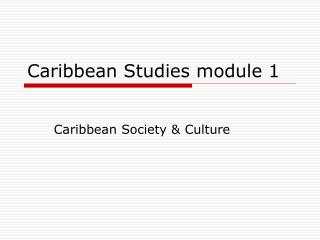 CARIBBEAN STUDIES - . past paper review 2009. question one. explain what is meant by the following terms: plural society

Carib Studies Module 1 Notes - . this is a relatively brief compilation of caribbean studies notes for cape from no less

1 Anglophone Caribbean Demographics - Women of african descent in the commonwealth caribbean: past struggles and present

MODULE 1 - . introduction. our acts or responses to a situation practically reflect our feelings, thinking and judgment

African Influence on Caribbean Culture - . history. about 5000 b.c the first people to lived on the caribbean islands