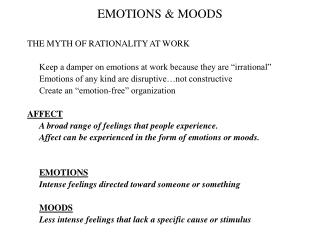 EMOTIONS & MOODS. THE MYTH OF RATIONALITY AT WORK Keep a damper on emotions at work because they are “irrational” Emotions of any kind are disruptive…not constructive Create an “emotion-free” organization AFFECT A broad range of feelings that people experience.

Personality - . by: ania syrowatka march 5 th , 2008. personality. who we are – our uniqueness influences our behavior,

Imagery and Figures of Speech - . imagery. imagery – vivid language that addresses the senses can be used to convey

Difficult Emotions and Emotional Intelligence - . by: christine behlmann east. “never let the sun go down upon your

Using Verbs in Moods - . verb moods indicate a state of being or reality. they show the manner in which the

Moods and Lines in Artist’s Work - . now that you know: 1. how to draw the different types of line 2. proper names of

Rational Emotions How Emotions Succeed When Reasoning Fails - . eyal winter the center for the study for rationality the

The Semantics of Emotions - . ps r.hickey “language and culture” florian peter grundstudium ln. the semantics of

Emotions and Body Chemicals - . what is emotions. mental state that arises spontaneously for example: anger happy