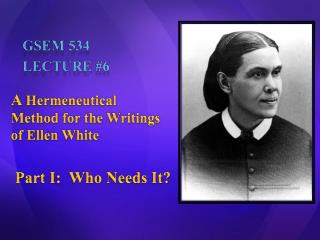 GSEM 534 Lecture #6. A Hermeneutical Method for the Writings of Ellen White Part I: Who Needs It?. A Practical Reason for the Importance of Hermeneutics. Most controversies over the use of the Ellen G. White writings are at least ostensibly related to issues of interpretation.

Lecture 11: - . 802.11 wlan’s and other recent technological developments. this lecture provides discussion of the

Mobile Programming Lecture 8 - . notifications, services, asynctask. lecture 7 review. how and where in your code do you