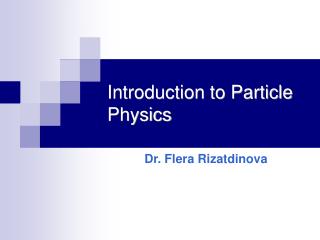 Introduction to Particle Physics. Dr. Flera Rizatdinova. High energy group at the OSU. We have both theoretical and experimental groups Theoretical group: Dr. Babu and Dr. Nandi and graduate students. Main focuses are on the neutrino physics,