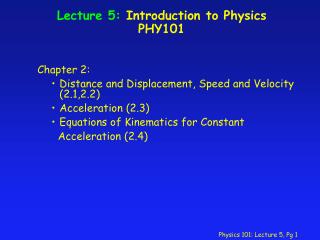 Computational Physics (Lecture 5) - . phy4370. extreme of a function. an associated problem to finding the root of an

Physics 114 – Lecture 5 - . §2.7 falling objects galileo, any object at surface of earth in free fall accelerates at a

Introduction To Computing Lecture # 5 - . by omer iqbal email omer.iqbal@hotmail.com. introduction. what is an operating