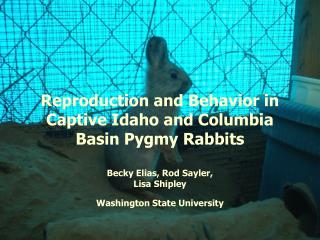 The Columbia Basin Pygmy Rabbit - . when where they extinct?. declared extinct in the wild in the '90s, after the

Columbia Basin Wildlife Mitigation - Much appreciation to peter paquet, richard stiehl, and john andrews for their

Fibonacci… and his rabbits - . leonardo pisano fibonacci is best remembered for his problem about rabbits. the answer

pygmy possum - . a n endangered species. by jess. where is the pygmy possum