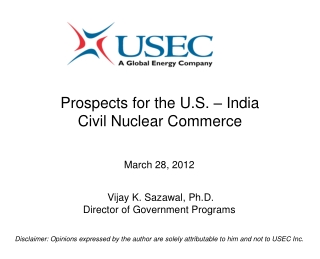 Prospects for the U.S. – India Civil Nuclear Commerce. March 28, 2012 Vijay K. Sazawal, Ph.D. Director of Government Programs Disclaimer: Opinions expressed by the author are solely attributable to him and not to USEC Inc. Topics. Overview of the Indian Power Situation