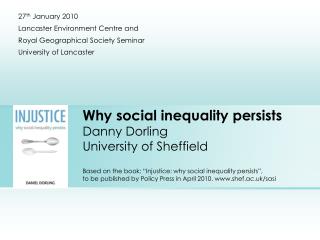 AGH and Lancaster University - . non-intrusive network based assessment. assess based on visibility of individual packet

Janet Eccles Lancaster University - Beyond ‘a linguistic event’ reconceptualising what we might mean by belief: the

Janet Eccles Lancaster University - Beyond ‘a linguistic event’ reconceptualising what we might mean by belief:

History of Lancaster - . geography of lancaster. lancaster sits on a plain. a number of waterways run through lancaster.

Science and Technology at Lancaster University - . about science and technology. one of four faculties at l ancaster.

27 th January 2010 - . cost -effectiveness. why do we need to measure it?. study designs?. cost effective interventions?.

Christopher Lancaster - . and this is my inner voice . the reason for my poem. the reason why i picked this spoken word

Lancaster County - . nathen good. how was it settled?. lancaster county is located in the south central part of