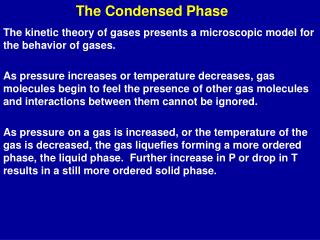 The Condensed Phase. The kinetic theory of gases presents a microscopic model for the behavior of gases. As pressure increases or temperature decreases, gas molecules begin to feel the presence of other gas molecules and interactions between them cannot be ignored.

Condensed Phase vs. Vapor Phase Units - . a primer for those who slept through the ideal gas laws in chem 101 class.

Toward Accurate Potentials for Condensed-Phase Chemical Reactions: - Equipotential contours of the pes of the reaction in

The Condensed Version WWII - . ssush19 the student will identify the origins, major developments, and the domestic impact

Condensed matter - How do atoms condense when they want to minimize energy?. forms of matter as we know:. condensed

Free Energy, Vapor Pressure and the Equilibrium Between a Vapor and Condensed Phase - . references: thermodynamics , g.