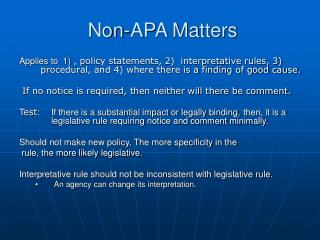 Non-APA Matters. Applies to 1) , policy statements, 2) interpretative rules, 3) procedural, and 4) where there is a finding of good cause. If no notice is required, then neither will there be comment.

apa - Apa guidelines for electronic media. 1) direct readers as closely as possible to the information being cited --

APA - . american psychological association. why use apa?. the purpose of apa. consistent format for the social sciences.

APA - . american psychological association. what is apa?. apa is the way that disciplines within the social sciences