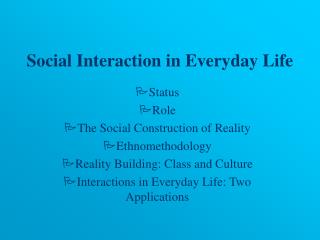 ‘Museums, Social Capital, and Everyday Life - . gaynor bagnall. why the interest in the

‘Museums, Social Capital, and Everyday Life - . gaynor bagnall. why the interest in the

COMMUNICATION IN EVERYDAY LIFE - . ideal conditions and the three modes of talk!. lecture 4b. a humanistic model of

Memory in everyday life - . strategies for memory improvement. you can improve your memory using various techniques:

Geometry in Everyday Life - . student example. perpendicular lines. this is part of a cinder block wall at school.

Stress in everyday life - . objectives . you should be able to distinguish between: life events and hassles. life