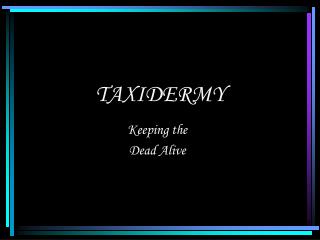 D-Taxidermy - . from deer to fish, we can do it

Taxidermy Tempe AZ - If you love to hunt down beautiful and unusual animals, the place to start looking for a taxidermist

POETRY - ~images~. appeal to the five senses. . the bear in the back room is wormyits meat is all stinky and squirmy,so

The Hardy boys - By: franklin w. dixon. the hardy boys. the dangerous transmission . frank and joe hardy visit a friend

The Landlady - . by roald dahl. title. a landlady is the owner of a “ boarding house ” people pay to stay in her

Theory of Natural Selection - . darwin. charles darwin. was supposed to follow in the family footsteps and become a