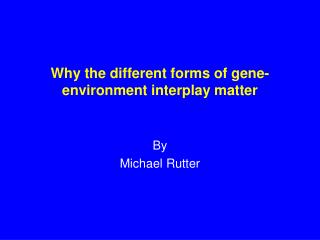 Why the different forms of gene-environment interplay matter

Why the different forms of gene-environment interplay matter . By Michael Rutter. FOUR MAIN VARIETIES OF GENE-ENVIRONMENT INTERPLAY. Epigenetic effects of environments on gene expression Variations in heritability according to environmental circumstances Gene-environment correlation

Why the different forms of gene-environment interplay matter

Falling in Love with Forms [Web Design Day] - Forms. without them, the web would not be what it is today, but they are

Falling in Love with Forms [BDConf 2014] - Forms. without them, the web would not be what it is today, but they are

Chapter 14: Mendel and the Gene Idea - . phenotypic features of organisms are characters ; each can have a variety of