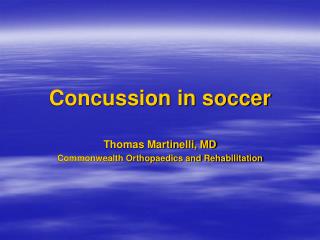 Concussion in soccer. Thomas Martinelli, MD Commonwealth Orthopaedics and Rehabilitation. Presented to. Virginia Youth Soccer Association January 22, 2011. Historical Example of what not to do. 1973 13 year old CYO football punter in first half – bad snap – runs for it

Concussion in sport - Goals/objectives. 1. become comfortable with sideline evaluation/diagnosis of concussion including

CONCUSSION - . the syndrome of concussion is very common in sport. it is a transient condition with full recovery

Concussion - . in cooperation with. altoona area school district. what is a concussion?. a concussion is a brain

Concussion - . imran hafeez, md. defintion. concussion is often used in the medical literature as a synonym for mild tbi

Concussion - . a mild brain injury. symptoms include:. confusion. anything that makes the brain bounce around and

Concussion Protocols - Are you ready?. concussion