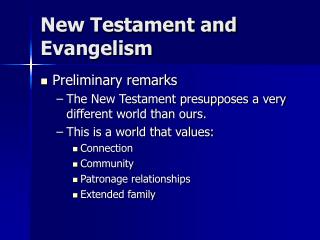 HAB-067 - . armor of god: boots and evangelism. the boots. and your feet shod with the preparation of the gospel of peace

Rhema Week 2.1 The New Testament - . welcome back! a very happy new year to you all james and richard. 1. spring term

TIE - DYE - . tie-dye dates back to ancient times. along with beads, shells, and other ornamentation, our ancestors

BENEVOLENCE AS A MEANS OF EVANGELISM THAT TURNS THE WORLD UPSIDE DOWN - . dates: december 21-23, 2009 venue: kalookan

Here am I! Send Me! - . isaiah 6:1-8. the church’s work in this present world greatly involves evangelism. the

Old Testament Timeline - . benjamin s. heath. “to every thing there is a season , and a time to every purpose under the

Divine Authority - . lesson 11 the individual christian, the local church and evangelism. what we have learned in the

MeeknessAndTruth - Challenges to evangelism in a post-modern world. www.meeknessandtruth.org. the challenges of