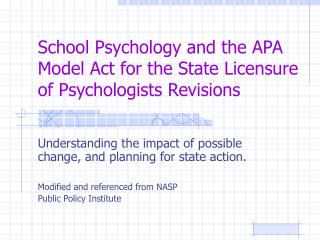 School Psychology and the APA Model Act for the State Licensure of Psychologists Revisions. Understanding the impact of possible change, and planning for state action. Modified and referenced from NASP Public Policy Institute. What this Presentation Covers.

School Psychology – Division 16 of APA - . what is school

NCEES and the U.S. Licensure Model - What is ncees?. a nonprofit organizationconsists of 70 member boardsall u.s. state

&quot;State of the Industry&quot; Regarding Animal Model Development and Using the Animal Rule for Licensure

Ethics and Law for school Psychologists - . chapter 5. one builds to the other. section 504: rehabilitation act of 1973.

State of the School - . may 29, 2012. powerpoint design by: neal james. the nuames compact. i. our mission our mission is

State of the School - Welcome to back to school night. state of the school. schedule for this evening. 7:00-7:30