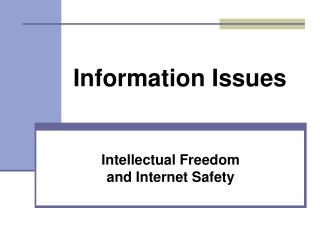 Governments and the Internet: A Threat to Intellectual Freedom? - . presented by judy oberg and sarah chase-kruszewski

Intellectual Freedom for School Librarians - . in·tel·lec·tu·al free·dom , n. the belief that all people should be

The Law and Internet Freedom - . can public schools censor or punish students' on-campus

Private VPN Services – A Way of Internet Freedom and Data Safety - As far as private vpn services are concerned, it is

Internet Safety and Kids - . ms. lee’s classroom. computers are not bad. computers can be used to help kids learn and

Internet use and safety - . patterson huff intro to computers-7 th grade. how to avoid plagiarism. tell where you found