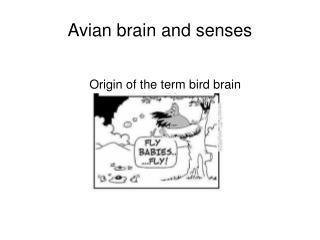 Avian brain and senses. Origin of the term bird brain. Intelligence and instinct Bird’s brains are small compared to most mammals and it seems that some birds are poor at learning new skills. The Brain and Senses - . cerebrum: the largest part of the brain that in which the process of thinking, learning, and

The Brain and the Senses - . psychology. the power of the brain. human brain has 10 billion neurons (30,000 can fit in

Perception and Senses - . biology 12. perception and ink blots. inkblots are just meaningless blobs of ink. yet like

Receptors and Senses - . amelia hoyt. relationship between receptors &amp; senses. the senses are a result of

Senses and Sensibility - . or jane austen and the enterprise. paul rosenberg prosenberg@yahoo.com 301-986-3826. taxonomy

Senses - . done by: mariam al-khalifa class: 7c science. touch. how does the sense of “touch” work?

Senses - . chapter 18. sensory receptors. first structure in a reflex arc specialized for specific stimuli may be

Senses - . s ense. frege’s goal. frege : mathematical truths are analytic a priori. we know them via proofs which can

Senses - . smell and taste. taste. chemoreceptors (stimulated by chemicals) are located on the tongue when each of these