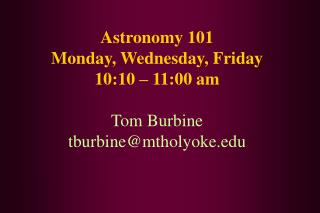 Astronomy 101 Monday, Wednesday, Friday 10:10 – 11:00 am Tom Burbine tburbine@mtholyoke.edu. 1 st HW assignment. You need to find an article on the Solar System (web, newspaper, magazine) Print it, copy it, or cut it out Read it

General GeoAstro II: Astronomy - . the name of the game : slides will not be put on the web attend the lectures, take

Astronomy: The Solar System and Beyond 5th edition - . michael seeds. even a man who is pure in heart and says his

An Introduction to Astronomy Part XI: The Birth and Death of Stars - . lambert e. murray, ph.d. professor of physics.

Chapter 3 The Science of Astronomy - . 3.1 the ancient roots of science. our goals for learning:. in what ways do all

General Astronomy - . astronomical instruments. the formation of images. suppose we want to apply some of the properties

Basic Principles of CCD Imaging in Astronomy - . based on slides by simon tulloch available from