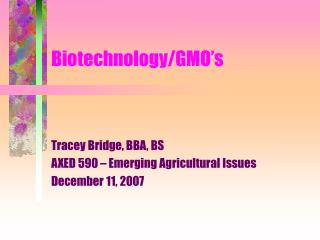 Bridge Software - A bridge connects networks and forwards frames from one network to another. ports a b e f bridge c d g

Stick Bridge Project - Objective:. design and engineer a bridge using 2mm basswood sticks to hold as much mass as

Introduction to Biotechnology! - . learning outcomes. describe the science of biotechnology and identify its product

Biotechnology - . what is it?. i. biotechnology . a branch of science that uses living organisms to manufacture food,

What is Biotechnology? - . biotechnology (by-o-tek-nawl-a-gee) bio—short for biology—the study of living things