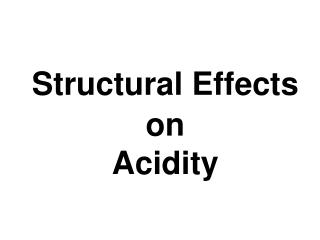 Structural Effects on Acidity. Acidity is associated not only with the tendency of compound to yield hydrogen in H 2 O but also to accept an electron pair to form a covalent bond .

Substituent Effects on the Acidities of Carboxylic Acids - . when substituents are attached to a molecule, such as a

Structural Equation Modeling (SEM) Essentials - . purpose of this module is to provide a very brief presentation of the