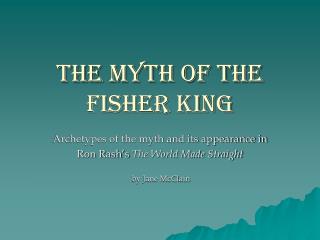 The Myth of the Fisher King. Archetypes of the myth and its appearance in Ron Rash’s The World Made Straight by Jane McClain. THE FISHER KING MYTH In Arthurian legend, there is a story of the Fisher King. To summarize, a guardian of the Holy Grail is injured as a result of his inability

King Fisher - At kingfisher, we have been manufacturing and fitting high

The Myth of the Cave - . taking notes and participating in discussion. underline the lines in the paragraphs we discuss.

The Power of Myth - . historical maps. map of jewish expulsions and resettlement areas in europe . 1100 to 1500. pogroms,

The Myth of Excellence - . becoming relevant to consumers and customers june 18, 2002 cincinnati, ohio. the situation. a

The myth of Narcissus - . the queen sent echo to search for her husband because she thought he went with other women.

The myth of multitasking - . an introduction to cognitive learning theories and their implications for teaching staff and

The power of Myth - . if a being from another world were to ask you, “how can i learn what it’s like to be human?”

The Myth of Entrepreuneurship - . (donald f. kuratko and richard m. hodgetts , 1995): entrepreuneur are doers, not

The Myth of Sisyphus - . camus’ theory of absurdity. the philosophy of the absurd . one of the main themes of camus’

The Myth of Phaethon

The Myth of Community - . defining community and participation. by: samuel m musyoki. unit: m04u01. outline of the

The Myth of Prometheus - A dystopian reinvention of the myth of

Ways of Interpreting Myth The Web of Myth - . ancient vs. modern. the web of

Vocabulary of the Myth - . myth : a traditional story that is rooted in a particular culture, is basically religious, and

The myth of Narcissus - . the queen sent echo to search for her husband because she thought he went with other women.

The Myth of Sirens - . sirens. greek mythology one of three sea nymphs, usually represented with the head of a woman and

The Myth of Sisyphus - . albert camus. the wisest and most prudent of mortals. accused of a certain levity in regard to

The Myth of Theseus - . theseus: the athenian hero. son of poseidon, aegeus (king of athens) and aethra (princess of