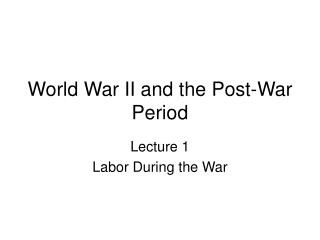 World War II and the Post-War Period. Lecture 1 Labor During the War. Administrative. Reading reminder – All the rest of the reading on this topic by the next class. Review. Dramatic Changes in labor and employment law in the 1920s and 1930s

Post World War II - . what were some of the lingering issues at the conclusion of wwii ? and how would they be solved?.

Post World War II - . much of europe was in ruins following w. w. ii soviet forces occupied most of eastern and central

The Post-War Period - . cold war &amp; recovery and renewal in europe. aftermath of the war: emergence of the cold

Post World War I leading to World War II - . the depression in the 1930s was the deepest and most widespread economic

Post-World War I &amp; World War II Georgia - . ss8h8 analyze the important events after world war i and their

Chapter 44: Segregation in the Post-World War II Period - . how did segregation affect american life in the postwar

World War II and the Cold War - . dictators and war mobilizing for war roots of the cold war the cold war expands. 20 th

World War II and the Cold War - . “this war is a new kind of war. it is warfare in terms of every continent, every