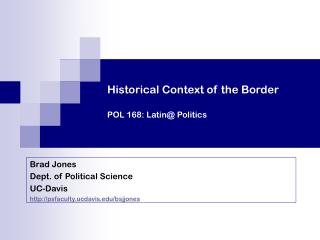 Historical Context of the Border POL 168: Latin@ Politics. Brad Jones Dept. of Political Science UC-Davis http://psfaculty.ucdavis.edu/bsjjones. Useful to Look Back at the Border Historically. The border is a fluid concept Connotes both geographical and psychological distinctions.

Historical Thinking: Part II - . creating a historical process. where we finished. looked at historical thinking as a