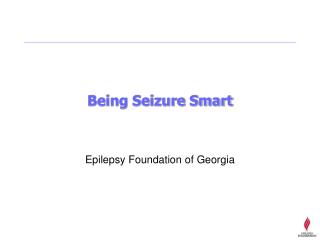 Being SMART - . what does it mean to be smart? what characteristics does a smart person have?. billions of nerve cells

BEING A SMART CONSUMER - . definitions. consumer – someone who uses goods or services goods – products services –

BEING PREPARED IS SMART! - . the objective of this workshop is to help congregations be prepared for a disaster or

Seizure - . seizure &amp; epilepsy. seizure. an epileptic seizure is a transient symptom of excessive or synchronous

Seizure - . dr. shreedhar paudel may, 2009. seizure…. a seizure is a sudden disruption of the brain's normal electrical

Being Prepared With Smart Insurance - Homeowners insurance: owning a house is not just an expensive affair but it also

Seizure Disorders - . albemarle county public schools. what is a seizure?. an event in which there is a temporary change