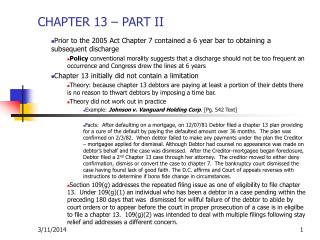 CHAPTER 13 – PART II . Prior to the 2005 Act Chapter 7 contained a 6 year bar to obtaining a subsequent discharge Policy conventional morality suggests that a discharge should not be too frequent an occurrence and Congress drew the lines at 6 years

Discipline and Punish: The Birth of the Prison 4.1 Complete and Austere Institutions - Schema of the book. part 1: