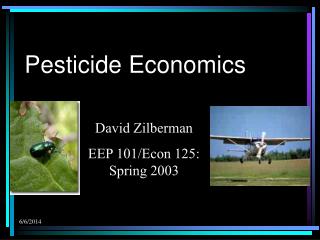 PESTICIDE - . 3 pesticide names. a) chemical names the systematic name of a chemical compound (international union of

Pesticide Formulations - . eny 3225 or eny 5226. why formulate pesticides!. pesticides are rarely applied in their

DDT pesticide - . kimberly francis . what is ddt?. dichlorodiphenyltrichloroethane (ddt) is a organochlorine contact

Pesticide Toxicology - . glen sampson. the public debate. the public perceives “pesticides” as a unique class of

PESTICIDE ISSUES - . “we need to recognize that pest control is basically an ecological, not a chemical problem”

Pesticide Residue - . from the farm to the fork…. what are categorized as