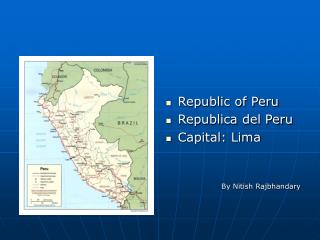 The Conquest of the Incas - . francisco pizarro. he was an illiterate, impoverished soldier, of who little is known.

Peru, South America - . where is peru?. map of peru. peruvian flag. what language do they speak in peru?. spanish. peru

Republica Del Peru - . peru is on the western (pacific) coast of south america peru is just smaller than alaska and has