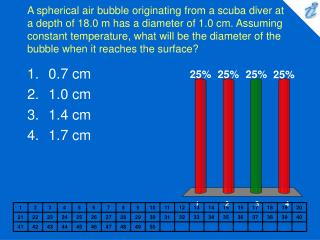 A spherical air bubble originating from a scuba diver at a depth of 18.0 m has a diameter of 1.0 cm. Assuming constant temperature, what will be the diameter of the bubble when it reaches the surface?. 0.7 cm 1.0 cm 1.4 cm 1.7 cm.

62 cm - . rules and regulations. only spaghetti and marshmallows may be used to build your tower all materials must be

10 cm - . “next to man with this traps, the codfish is probably the most destructive enemy of the lobster …”

17. A 25-cm-diameter circular saw blade spins at 3500 rpm. How fast would you have to push a straight hand saw to have

17 Acids and Bases - . a group of chemical properties is related to acidity. according to these properties, a substance