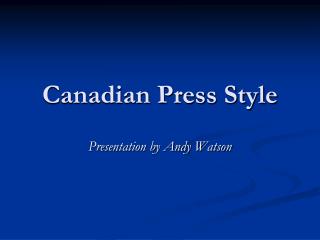 Canadian Press Style. Presentation by Andy Watson. What is CP Style?. CP stands for Canadian Press ( www.cp.org ) CP Style was developed to create consistency and was an “operator’s guide” for staff at The Canadian Press, Canada’s national news agency

Associated Press Style - . what is it?. associated press style is almost universally used by american newspapers, and by

Associated Press Style - . week 1. what is it?. associate press stylebook is most commonly used manual for writers and

Democratic Government: Canadian Style - . what is canada’s constitution?. canada is a constitutional monarchy- to me

Press Through - 1 peter 4:12-19. press through. approaches to suffering. ignore or make light of our suffering and pain.

Arnold Press - . step 1. sit on a flat bench and hold a pair of dumbbells at the level of your shoulders. your palms

workshop press - All of our wheel bearing press tools combine quality and reliability with great value for money. shop