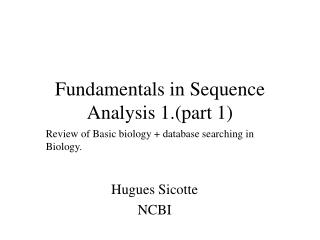 Sequence analysis of nucleic acids and proteins: part 1 - . similarity search. based on chapter 3 of post-genome

Sequence #1 - . the tron (legacy) motorcycle rides into the screen at the top left - you can hear the sound of a fast

Lexical Analysis Part 1 - . cmsc 431 shon vick. lexical analysis – what’s to come. programs could be made from

System Analysis (Part 1) - . what is a system? what is analysis? system analysis why would we change a system? the system