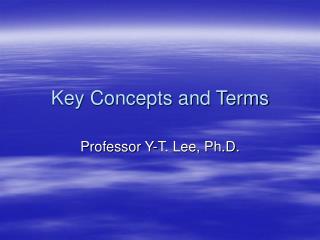 Inferno Key Terms/Concepts - . dante. definition: a poet and statesman, dante was born in florence, italy, around 1263.

APIP Standard: Key Concepts and Terms - . apip goals. develop and exchange test items, the delivery of which can be

Key Philosophical Terms &amp; Concepts - . materialism. a doctrine which holds that the only thing that can truly be

Terms and Concepts - . one step. two step. three step. more than one variable. potpourri. terms and concepts. one

AS2 Introductory Key Terms &amp; Concepts - . in issuing the emancipation proclamation, one of lincoln’s goals was

Traffic Terms and Concepts - . why do we need to concern ourselves with traffic when we design pavements? traffic is what

Resource Concepts and Terms - . resources : all materials/forces in the environment that can be used. reserves :